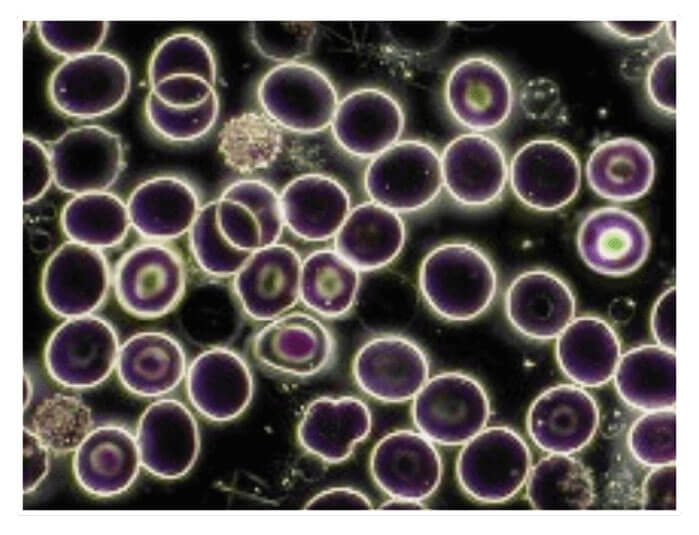 A growing number of practitioners in North America are rediscovering darkfield microscopy, a popular procedure and mainstayof prevention-minded doctors in Germany and other European countries.

Darkfield microscopy uses whole blood from a fingertip placed under the microscope unstained, and uses higher magnification with a darkfield lens and specialized lighting that allows one to see much more than could possibly be seen by conventional and phase contrast microscopes.

Many deficiencies, biochemical imbalances or toxicities can be detected by darkfield microscopy longbefore routine lab tests show any problems. Early nutritional intervention through dietary changes, supplementation and homeopathic medicines can then be implemented.

What Can Darkfield Microscopy Show?

Poor circulation, oxygenation level and abnormal blood clotting "Gaston Naessens' next invention was the development of a treatment that he calls 714-X. 714-X is a nitrogenized camphor derivative (trimethylbicyclo-nitraminoheptane). As I understand it the rationale behind this treatment is as follows: Gaston Naessens learned that tumours are nitrogen traps. They steal nitrogen from the body and this inhibits the immune system. By supplying nitrogen to the tumour and the body, the immune system is disinhibited, and the body begins to heal itself. (Camphor has a natural affinity for tumours and, as it is not toxic at pharmacological doses, it proved to be the perfect vehicle to carry the nitrogen to the tumour and the body.) The serum is injected "paranodularly" - that means next to the lymph nodes - so it is absorbed into the lymphatic system where it can act most directly.

People close to Gaston Naessens' work believe that 714-X is best used early. While they believe it may save one in twelve of the terminally ill patients who turn to it on their death beds, and maybe one in six of the advanced cancer patients who try it as a last hope, when it is given early in the disease process, they feel that it might help almost everyone. Further, anecdotally, even in advanced cancer, 714-X may greatly improve quality of life”.